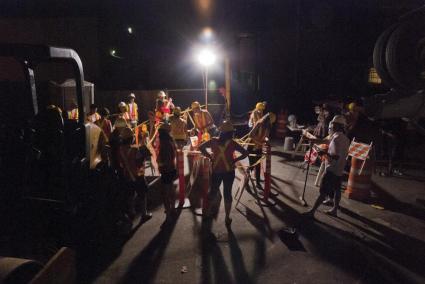 VIVO presents NOTHING HAPPENING, a three-hour live performance by French Artist in Residence Nicolas Boone, alongside LIQUIDATION, a retrospective exhibition of his video works. Both events are presented in conjunction with PAARC’s Swarm Festival of Artist Run Culture on Thursday September 8 from 7-10pm. The performance serves as a set for Boone’s next video production, to be presented with a live soundtrack by Philippe Pasquier on Wednesday September 21 during the LIVE International Performance Biennale Sept 15-25, hosted by VIVO. Two of Boone’s works, TRANSBUP and LA TRANSHUMANCE FANTASTIQUE will be presented by DIM Cinema at the Pacific Cinematheque on Monday September 19.

NOTHING HAPPENING AND LIQUIDATION are co-presented by LIVE International Performance Biennale, DIM Cinema and the Pacific Cinematheque. Nicolas Boone’s Artist Residency and Exhibition is generously supported by the Consulate General of France in Vancouver and Institut Français. NOTHING HAPPENING is sponsored by Kerrisdale Equipment, Lafarge, Western One, A+B Tool Rentals, Rona and Home Depot. The installation of LIQUIDATION is generously supported by The Grunt Gallery and The Western Front.