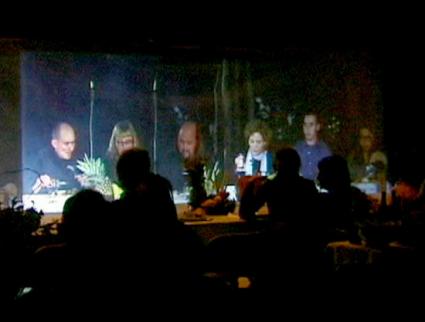 You are Invited: A retrospective exhibition and farewell dinner party for Dinka Pignon

You Are Invited will exhibit the following works produced at VIVO over the last decade:

Not Sure (2010). The human mind doesn’t rest easy with ambiguity. It wants certainty at all times, no matter what. However, this decisiveness comes at a cost. Much gets lost by forcing experience to the frame of concepts. Not Sure invites staying with the inherent ambiguity of things. The continual falling into the space beyond and between distinctions is meant to leave awareness poised in an ataraxic suspension above its eternal ground, the gestalt “whole greater than the sum of its parts”. (Sound: Emma Hendrix)

Pool (2003)
A video of people diving underwater is projected onto and through the water in a pool.

Elementals (2008)
Elementals is a video sculpture–a piece of physical place inhabited by spirits of the imagery imprinting it. The apparitions appear to be both within and emerging from the substance–arresting it. William Blake said, “Everything we see, is Vision”. Elementals would then be vision imposed. It is a metaphor for what we can’t help but do–project our vision onto everything we see. Language and meaning follow to shape our understanding of the world. In the installation, a rain of alphabet sinks into the sand, resurfaces and dissolves, then falls again. The loop emulates a search for the figurative origins of words and the long forgotten connection between letter and form. [Creative coder: Jesse Scott, Sound: David Leith + Paul Lansky’s Idle Chatter]

Dinka Pignon is an interdisciplinary media artist working in video installation and performance art. Her experimental practice is characterized by a strong affinity for the phenomenal, liminal, conceptual and minimal. Her work is situated in the field of ‘mixed reality’, operating on the borderline between the real and the virtual. In her installations, large-scale video projections reshape the architecture of the space and create illusionary effects over objects. The installations become virtual environments for performance, often inviting audience participation. Over the last 30 years, Dinka has produced a large body of work that has exhibited world wide. Parallel to her own practice, she has coordinated and curated interdisciplinary art events, festivals, experimental workshops and international art exchange programs. Devoted to artist-run culture, she has spent most of her working life in artist-run centers: 15 years at the Fylkingen for New Music & Intermedia Art in Stockholm and 10 years at VIVO Media Arts Center in Vancouver. 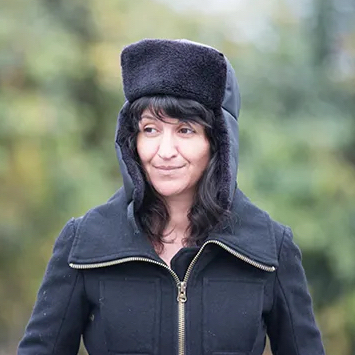 Sebnem Ozpeta is a Vancouver-based visual artist, video editor, and videographer. She studied graphic design in Turkey, where she was born and raised. She also completed the digital film program at The Art Institute of Vancouver. She has produced short films and video installations that have been screened and exhibited in festivals in Europe, Canada and Turkey.

For more than 10 years, she has collaborated with artists, performers, storytellers, dancers and filmmakers. More recently she has applied her video skills and her experience in storytelling by mentoring youth as part of the Digital Story Telling project (in collaboration with Lisa G. Nielsen and Lorna Boschman).