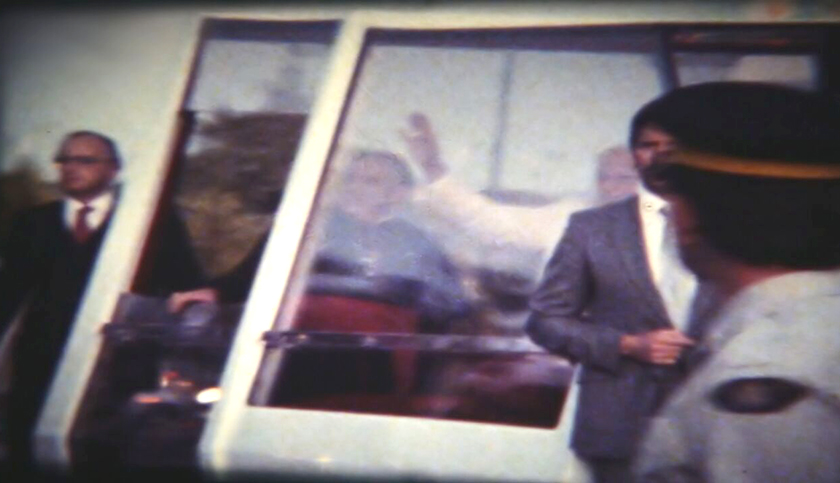 It’s Anniversary Time!  For our 45th anniversary year, Video Out put a call out for works that celebrate the medium of video — “the medium of narcissism” as writer Rosalind Krauss so astutely put it in 1976.  Appropriation, homage, reassemblage, and the use of archival material were encourage in the call-out as we look at how far we’ve come, and where we might be headed.  Video Out is pleased to present a screening of these newly acquired works on Wednesday, July 18th, the date of VIVO’s original incorporation back in 1974.

The screening starts at 7pm.  Refreshments and snacks will be served.

This is DVD – The Single Dads
2018, Canada, 1:02
This is DVD is a comedic look back at past video media formats through the appropriation of commercials for various now-obsolete video technologies. The once shocking imagery of these commercials now evoke a sense of nostalgia; is that still possible with the speed at which technology presently changes?

Reconstruction 1865 – Tom Richardson
2017, Canada, 3:45
Reconstruction 1865 is a meditation on Abraham Lincoln’s premonitions of his assassination as per his diary entries, D.W. Griffith’s 1915 racist blockbuster The Birth of a Nation, and the inherently violent language associated with cinematic and photographic production.

On Being Alone – Susanna Browne
2018, Canada, 5:06
With audio from a series of Catherine Deneuve-narrated Chanel No. 5 advertisements from the 1970s and 1980s and video footage from various royal weddings, On Being Alone examines the relationship between beauty, love, and security though the language of advertising.

Not Like Dominoes – Don Xaliman
1981/2018, Canada, 7:27
“Not Like Dominoes” was originally a music video directed by artist, activist, and provocateur Lenore Herb aka Doreen Gray, and produced by Don Xaliman for his band, the Melodic Energy Commission, in 1981. This 2018 version is a re-edit of the original, in which Xaliman uses video feedback, oil and water projection techniques, stop frame animation, and digital re-coloring to reinterpret the piece.

Homage to the Faceless Woman – Jessica Johnson and Karen Zolo
2018, Canada, 8:11
Making her way through downtown Vancouver, the faceless woman is a homage to Gillian Wearing’s Homage to the Woman With the Bandaged Face Who I Saw Yesterday Down Walworth Road (1995), and to all women.

10th Frame – Kent Tate
2018, Canada, 1:10
Filmed in 1984 and reworked in 2018, 10th Frame focuses on the time around the decisive moment as Pope John Paul II left YVR. A local reporter at the time remarked, “You’d take 10 frames and you’d never get him, and then suddenly his face would appear between the two cops standing in front.”

This Boogie is for Real – Stephanie Gagne
2018, Canada, 3:20
This Boogie Is For Real is a compilation made from that artist’s VHS tapes sourced from Stage 1 Dance Centre during the late 90s to the early 2000s. Combining the footage of amateur dancers performing for their family and friends, synced to the smash-hit by Jamiroquai, this video is proof that the best way to celebrate the 45th anniversary of VIVO Media Arts is to dance like there is no tomorrow!

This event takes place on the unceded territories of the Tseil-Waututh, Squamish, and Musqueam peoples.