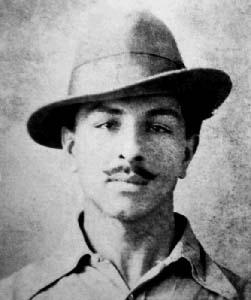 NRAI: Bhagat Singh's "Why I am an Atheist"

The Marxist revolutionary penned ‘Why I am an Atheist’, a profound indictment of religion as he languished in an Indian prison awaiting execution.  Accused of “arrogant pride and vanity” by critics who decried his sustained repudiation of theism, Singh authored this compelling manifesto in an effort to articulate and expound upon his opinions on life and struggle.  Laden with polemics which lend new perspectives on fundamental philosophical questions of revolutionary theory, “Why I Am An Atheist” is a stirring argument against religious mysticism and dogma of every sort.

Bhagat Singh (1907–1931) was an Indian nationalist considered to be one of the most influential revolutionaries of the Indian independence movement. He is often referred to as Shaheed Bhagat Singh, the Hindi-Urdu word Shaheed meaning “martyr”.
Born into a Jat Sikh family which had earlier been involved in revolutionary activities against the British Raj, as a teenager Singh studied European revolutionary movements and was attracted to anarchist and marxist ideologies. He became involved in numerous revolutionary organisations, and quickly rose through the ranks of the Hindustan Republican Association (HRA) to become one of its main leaders, eventually changing its name to the Hindustan Socialist Republican Association (HSRA) in 1928.

Seeking revenge for the death of Lala Lajpat Rai at the hands of the police, Singh was involved in the assassination of British police officer John Saunders. He eluded efforts by the police to capture him. Together with Batukeshwar Dutt, he undertook a successful effort to throw two bombs and leaflets inside the Central Legislative Assembly while shouting slogans of Inquilab Zindabad. Subsequently they volunteered to surrender and be arrested. Held on this charge, he gained widespread national support when he underwent a 116 day fast in jail, demanding equal rights for British and Indian political prisoners. During this time, sufficient evidence was brought against him for a conviction in the Saunders case, after trial by a Special Tribunal and appeal at the Privy Council in England. He was convicted and subsequently hanged for his participation in the murder, aged 23.

Bhagat Singh’s Why I am an Atheist will be facilitated by Am Johal. Link to Reading