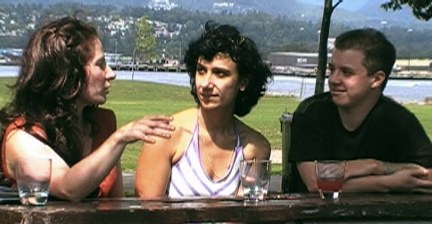 Curated by Juli Saragosa, this screening will feature film and video works – made by queer artists with transnational or colonized backgrounds. Each work addresses notions of language; the double meaning of words and various (mis)interpretations and clashes that can occur at the cross-sections of different cultures. This event precedes the presentation of “Italian-Canadian Queers Chat in East Van” an upcoming video installation by Saragosa, commissioned by VIVO and the ICC as part of Performigrations a travelling research project and exhibition funded by the European Union and premised on collaborative art-making practices and academic research on mobilities.

Notik Masowan? mesmerizes the audience through Frederick Cumming‘s depiction of three different Cree-speaking individuals: the warrior, the shaman, and the berdache (two spirit). Throughout the video “he” transforms “us” and our opinions of First Nations mother tongues and their continual disappearance.

woa enjelsch is an auto-ethnographic document/ary recording a Mennonite family gathering in 1980s southern Manitoba. Working with this appropriated footage, the artist frames and focuses attentions to the dynamics playing out in the opening performance; The Mennonite infatuation with history and family connections, attitudes towards assimilation and change, nostalgia for the ways of the past, all with the humourous approach inherent to Mennonite Plaut’deitsch. Literally translated as ‘to have become English’, woa enjelsch looks at the locations between belonging and outsider, the liminal spaces within linguistic and cultural identities, the contradictions of a static faithfulness to an eternally shifting culture.

This film is an answer to letters and emails the filmmaker received from the Postbank two years ago when she refused the bank’s request to provide proof that she is a “normal citizen”. She could not sue the bank for discrimination, however, since the law actually did permit such profiling.

This film, inspired by the book “Feminismus Schreiben_Lernen” explores quest_ions of language, position_ing and beLong_ing to comm_Unities beyond heteronormative mainstream. A unique collaboration between gender studies professor Lahn Hornscheidt and filmmaker Layla Zami, it stresses intertwined aspects of gender and race. This challenging mix of poetic documentary and experimental essay portraits people who leave temporary traces of their identities and politics in their surroundings. In the audiovisual medium, the u-topian quests for spaces and words are re-created, suggesting alternative linguistic practices and demanding new ways of seeing_listening.

A Flemish song from childhood… changed into questions of identity… numbering people, gender and [queer]

This video is about the way my mother peels mangoes and the meanings of “gatoey.” I read a definition of “gatoey” (more commonly transliterated as “kathoey”) from Se-Ed’s Modern Thai-English Dictionary, and a passage from “Toms and Dees: Transgender Identity and Female Same-Sex Relationships in Thailand” by Megan J. Sinnott.

In this short documentary, a Musqueam elder rediscovers his Native language and traditions in the city of Vancouver, in the vicinity of which the Musqueam people have lived for thousands of years. Writing the Land captures the ever-changing nature of a modern city – the glass and steel towers cut against the sky, grass, trees and a sudden flash of birds in flight and the enduring power of language to shape perception and create memory.

A 15 minute presentation and discussion about the interactive video installation that collages together footage from Vancouver’s east end of 3 Italian-Canadian queers talking about their strict Catholic upbringings (eg; expectations to marry), a personal essay about the characteristics I inherited from my immigrant father, and an interview with my Nonna about her experiences coming to Canada from Italy after WWII. Different perspectives on the multi-generational effects of uprooting are presented through a multi-genre collage of video, old photos and voice-over. 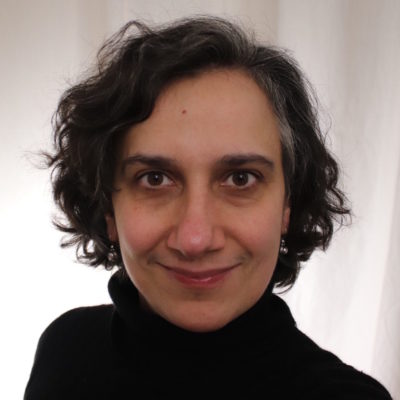 Growing up in an immigrant family, encouraged to try everything and the economic necessity to use what’s at hand (like a home photography darkroom), Juli Saragosa became an artistic experimenter from an early age.  As an interdisciplinary media and performance artist, Juli’s work extends to the curatorial and educational: she is a grassroots organizer of several independent festivals (The Project8 Super8 Film Festival and Mentorship Program-Vancouver, CA and the entzaubert queer DIY uncommercial film festival-Berlin, DE), a workshop leader (LIFT-Toronto, CA and VIVO-Vancouver, CA), mentor to young artists (Inside Out- Toronto, CA, Project8, and CFC-Toronto, CA), and as a media arts instructor (SFU- Vancouver, CA, UBC-Kelowna, CA and dBs Film-Berlin, DE).  Her works have been shown at festivals in Milan, London, L.A., Chicago, Berlin, Vancouver and Toronto.