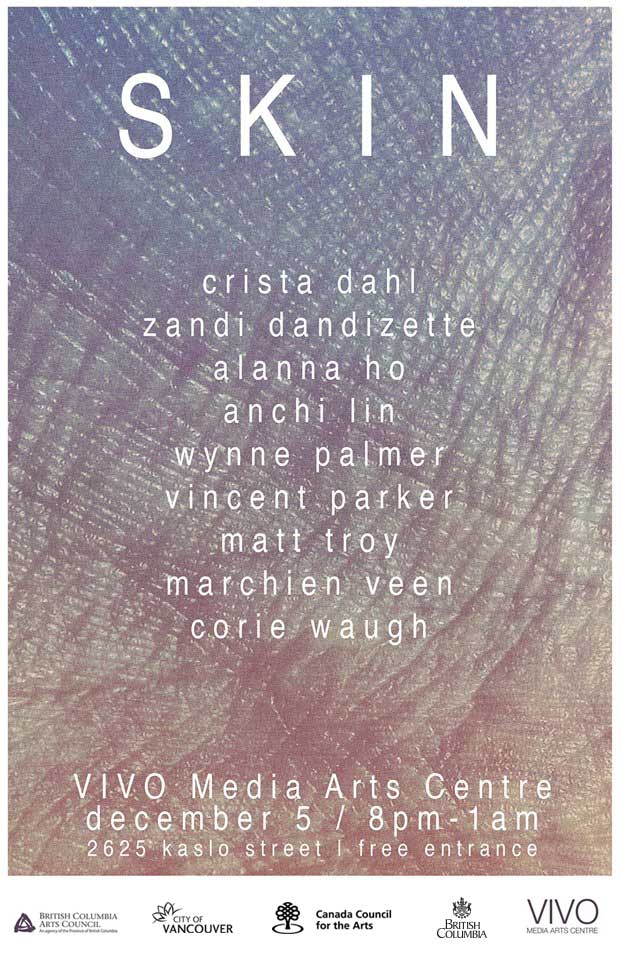 Nine Vancouver artists will be exhibiting a one evening media art and live electronic performance, curated and produced by students from VIVO Media Arts Centre’s Career Development Mentorship with media artist, Wynne Palmer. This event is hosted and supported by VIVO Media Arts Centre, made possible by a BC Arts Council Youth Engagement Grant.

‘SKIN’ addresses abstract concepts, derived from the material form of the physical body as a point of departure. The exhibition explores concepts including body architecture, gender, body shame, the remediated body, body as machine, collective health and spatial interactions. The famous Protagorean statement, “man is the measure of all things . . .” (aside from relativism) is an inspiration for using the human structure as a referencing unit of infinite things.

Born in Seattle in 1934 Crista Dahl describes this retrospective as inclusive of some sixty-five years of creative practice. Continually stymied by political and domestic conditions, Dahl’s pursuit of art training has followed innovative and experimental trajectories—from running an artist gallery/jazz coffee house in Seattle in 1963, to her beatnik life in San Francisco. Living in Haight-Ashbury in the mid 60’s had an enduring influence on Dahl’s life-work, as did her discovery of Will and Ariel Durant’s The Story of Civilization in the Powell River Library near Lund, where she was sheltering her sons from Vietnam War service in 1968. After moving to Vancouver in 1971 Dahl became an enthusiastic and committed member of some of this city’s most celebrated collectives and histories including the Intermedia Society, Little Hot Stove League, the Matrix International Video Exchange Conference, the New Era Social Club, the Satellite Video Exchange Society, Disasteroids, and more. Dahl’s insights into art and art teaching were supported by numerous grants and her Life Rhythm Project was presented at Simon Fraser University, Surrey Art Centre, Burnaby Art Gallery and University of British Columbia, among others. Today, Crista Dahl serves as a tireless and visionary volunteer archivist and Chairperson of the VIVO Board of Directors.

Zandi Dandizette is a Vancouver transplant from Portland, Oregon and is a recent Emily Carr graduate with a BMA in animation. As an interdisciplinary artist, they try to embody their work whether in design, performance, animation, or curation. Their focus is on colour, gender, shape, and line in accordance to movement.

Alanna Ho is an interdisciplinary artist and composer based in Vancouver, working primarily in the mediums of performance art and installation. She earned a BFA in Contemporary Music Composition and Theory from UVIC, and is an active art educator for youth. Ho’s research currently focuses on body in flux, memory, and long durational compositions.

Anchi Lin is an interdisciplinary artist currently pursuing her Visual Art degree at Simon Fraser University. Her work has manifested within the realm of performance and video art. Negotiating and interfacing with concepts such as language, identity, gender and cultural norms have significantly informed her practice.

Marchien Veen is an interdisciplinary artist with a prime interest in conceptual art and theory. She has received her Bachelor of Fine Arts from UBC with a major in Visual Art. Her work focuses on the manifestation of dissociative disorders through futile labour, repetitive tasks, and illuminating the glitches of the human-machine.

Wynne Palmer is a Vancouver-based interdisciplinary artist, curator and producer. She holds a BFA (Graphic Design + Photography) from U of A and BFA Visual Arts from ECUAD. Her practice focuses on the liminal space where the natural world and technology converge, bringing into question identity, concepts of location and the philosophy of language.

Vincent Parker is an artist and musician working in Vancouver, BC (BFA ECUAD 2009). He has his own instantly recognizable brand of original electronic music that is informed by east van bass music culture and the psychedelic roots of the Pacific Northwest. Everything Vincent does is entirely performed and conducted Live P.A.

Matt Troy is a media and event curator, promoter and producer. Graduating in 2012 from ECUAD and interning for media artist Paul Wong, Matt is now the Director of Vancouver Art & Leisure, hosting live media shows, performances and events.

Corie Waugh is an interdisciplinary artist based in Vancouver, with a focus on process-based projects. Corie has earned her BFA in Visual Arts from UBC Okanagan. Waugh explores the unsaid; her focus is on physical interaction and experience.